Something magical happens when you walk into a movie theater. As the lights dim, the screen lights up and the opening scene begins to play, you’re transported to another city, planet or even time. Hollywood movies take us to places we could never actually go.

Although many people believe movies offer entertainment value only, I’ve found movies to be a great place to learn about life, leadership and success. Movies use the visual arts to stimulate our thinking and help us learn new things. You just have to be willing to look a little deeper.

The following blockbuster hits have opened my eyes to the things successful people do, so grab some buttery popcorn and an ice cold drink, and sit back and enjoy these lessons on success, straight from Hollywood.

The X-Men are a superhero team comprised of mutants, all born with different superhuman abilities. Professor Charles Xavier, for example, has the power of telepathy. Ororo Munroe (Storm) has the ability to manipulate the weather, and Scott Summer (Cyclops) can shoot beams of energy from his eyes. Dr. Jean Grey has both telepathic and telekinetic powers, and Marie (Rogue) absorbs the memories and powers of anyone she touches. My favorite X-Men is Logan (Wolverine); he has animal-like senses, an enhanced healing ability and retractable claws he can use as a weapon.

Each member of the X-Men is powerful individually, yet something happens when they work together: They’re able to defeat world-destroying threats and villains like Magneto and Apocalypse. X-Men teaches us the valuable lesson of surrounding ourselves with smart, talented, successful people. Because when you do, you’re able to rely on their skills and abilities where yours might fall short. Success isn’t something you can achieve alone.

2. Successful people don’t give up.

The Pursuit of Happyness is based on the true story of single father Chris Gardner who is hit with one setback after another. Life is a struggle as his business fails and he’s faced with eviction, unpaid parking tickets and garnishment of his income due to back taxes.

But he doesn’t give up, landing a job as an unpaid intern in the hopes of becoming a broker. He defies protocols, takes risks and reaches out to potential high-value customers, and eventually his hard work pays off. On the last day of his internship, he learns he has been awarded a full-time position. Could you imagine if Gardner had given up? He could have remained homeless. He could have lost his son. He could have wound up working a dead-end job that barely covered the cost of food and rent. When life throws hardships at you, when you’re tired and beaten down, don’t give up. That’s not what successful people do. They persist. They fight. They continue doing the hard work like Gardner did.

Hacksaw Ridge focuses on the true-life story of Desmond Doss, a World War II army medic who refused to pick up a weapon or harm his enemies. He chose to help people instead.

One scene in Hacksaw Ridge sticks out in my mind months after watching the film. During the Battle of Okinawa, Doss has a choice: to descend the ridge and leave the wounded American soldiers there, or to go try to rescue them. Doss chooses the second option. He runs into the hellfire, risking his own life to help 75 men escape from the Japanese armies. Successful people don’t ignore the plight of others. They take action and help those who need it. They don’t abandon their post when times get tough and fear threatens to take over. Be that person.

I had a blast watching the original Guardians of the Galaxy. The sequel only reinforces the greatness of the first film. But one thing stands out in both volumes: Successful people have fun.

The highlight for me was the music. From Fleetwood Mac’s “The Chain” to Looking Glass’ “Brandy You’re A Fine Girl” to Silver’s “Wham Bang Shang-A-Lang,” you can’t help but crack a smile when the music plays. Then there’s the character Drax; he’s always having a good time, even when what he’s going through is a serious challenge. It’s action-packed and lighthearted at the same time, a refreshing combination. Don’t believe the lie that successful people don’t have fun. They do. They understand that a successful life is a balanced life. They work hard, but they understand the importance of having fun, too. Give yourself permission to laugh and don’t take life (or yourself) too seriously.

Is there a more iconic film series than Star Wars? One thing successful people have that many others don’t is a mentor, someone who gives them wise counsel and helps them make decisions.

In Star Wars: The Empire Strikes Back, Luke Skywalker flies his X-Wing Fighter to the planet Dagobah. Crash landing on the planet, he begins his search for Yoda, and once he finds him, Yoda begins to mentor him in the way of The Force—training him and helping him hone his skills. Eventually, he learns to raise his crashed X-Wing out of the swamp using these powers. Luke Skywalker’s mentor helped him learn a mystical art. Your mentor will help you discover the way of business, raising a happy family or mastering a new life skill.

Unbroken is another real-life story. Louis Zamperini was a mischievous youth; he constantly found himself in trouble. But his older brother Pete helped him get on the right track and eventually discover his passion (and talent) for running. 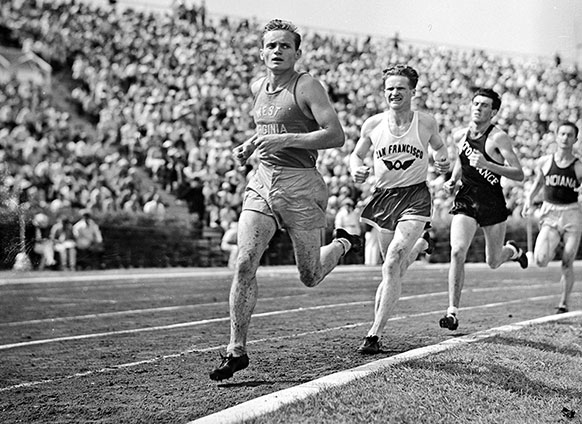 Successful people thank those who helped them get to where they are today. They recognize they didn’t achieve success on their own. They had help. Show your appreciation for someone who’s helped you get to where you’re at today.

Joseph Lalonde is an award-winning leadership blogger and the host of the Answers From Leadership podcast. He has a strong desire to see 20-somethings step into their roles as leaders.