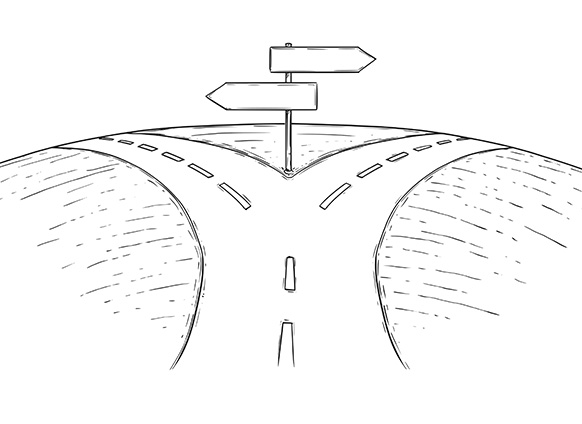 Nobody wants to second-guess their career choice. Yet there I was, in my first “real” UX role designing the interface for a mobile game, wondering whether I’d made the right call.

My worry? The flat visual mockups and addictive user flows that I was working on delivered value for the company, not necessarily the user. When it came time to make strategic decisions about the gamer’s experience, I didn’t have a seat at the table.

To secure that seat, I decided to try engineering. I’d enjoyed learning code, and the developers I knew had authority and ownership in a way that their design peers at the time, myself included, didn’t have.

So I took a job as a part-time UX designer. The product leader who hired me—an engineer himself and also an amazing person—agreed to help me improve my development skills by working on the code base on my days off.

I loved it. At first, I thought it was just learning a new skill. Then, I noticed something: My design and strategy muscles were being flexed as well. I’d become the customer’s voice on my team. I’d taken part in important decisions not just about the product, but also about the company itself.

That’s when it hit me: I wanted all three skill sets because they made me a better team member and a stronger leader. It took me years to discover it, but I was looking for the balance of community, creativity and individual challenge that only a hybrid role could provide.

Related: 5 Lessons on How to Make a Successful Career Change​

Experimenting to Find Your Future

“A little of everything” isn’t a career option that I’d considered in school. Although I didn’t realize it at the time, I discovered my path by applying experiment-driven design to my career:

I don’t believe that anyone is born to do a certain job. Let’s say, for example, that you thrive on solving a single hard problem and I prefer to jump between ideas. If each of us found a supportive environment, we’d make equally good engineers or designers.

Initially, I discovered UX design by talking with a friend. His startup was looking for a UX designer, but I’d never even heard of it. He described a role that sounded amazing: talking to people, solving problems, and being thoughtful and creative. I didn’t have the skills to commit then and there, but I did realize that I deeply valued that sort of work.

Whether you know what you want to pursue or just have an inkling, ask yourself why. Put pen to paper, and write freely for five minutes. Review your list, and keep asking why. Do the exercise again and again until you feel like you have nothing more to give. You’ll feel a sense of deep satisfaction once you’ve uncovered the reasons behind your inclination: your terminal values. Once you’ve discovered those, you can carve a path that lets you feed them.

I like to play a game I call “design improvements in the wild.” As I’m going about my daily life—reading magazines, grocery shopping, whatever it may be—I look for kerning errors, bad copy, silly Photoshop mistakes and unclear buttons. It’s fun, to be sure, but it’s also a way for me to sharpen my skills.

I began playing this game long before I became a professional UX designer. It was my way of putting on the design-thinking hat, of faking it until I made it. It was experimenting: Do I enjoy doing this? Do I like thinking this way?

Find ways to experiment with new skills every day to set you down your path. Grab a small project here and a volunteer gig there. If you want to be a lawyer, intern at your district court. If you want to be a yoga instructor, ask a teacher you admire to mentor you once a week. You don’t have to quit your job to start!

But before you do anything else, understand that it takes a beginner’s mindset. It’s critical to give yourself the freedom to fail. You’re going to stumble, but you’re not going to give up.

As I took on small projects and critiqued fonts in my free time, I was collecting information about how I felt. When I first started UX design, my goal was to have a job in four months. Two months in, I’d failed to hit expectations on a project. The design was terrible, and the client was angry. I felt like UX design was the worst decision I’d ever made, and I almost quit right there.

But two things kept me going: One, I was only halfway through my experiment. Two, I liked the work even when it was hard. No, it wasn’t particularly fun being told that my work wasn’t up to par. But the experiment wasn’t over, and until it was, I wouldn’t have the information I needed to decide whether to persevere or pivot.

At the end of your experiment, whether it succeeded or failed, look back at your whys. Did interacting with people for a living turn out to be as stimulating as you’d hoped? Did you find something new to enjoy during your stint at the law firm? If you failed, what kept you moving and why? If your answers align with your values, persevere. If not, pivot.

If you do have to pivot, don’t dwell on it. Not every role is going to align with your values and sense of self. But if it did, keep going. Reach for that next rung on the ladder you’re trying to climb. I have yet to meet someone who is unhappy while learning about something that interests him or her. Challenged? Yes. Exhausted? Perhaps. But deeply unhappy? No.

Ultimately, remember that it’s not really about success or failure at all. You designed your experiment explicitly to help you. If you found a career you love, that’s a valuable outcome. If you discovered that you didn’t want to pursue something, that’s valuable, too. But most of all, you gave yourself the freedom to learn, to be a beginner again and to try something new. That, I think you’ll agree, is the most valuable outcome of all.

Related: 5 Keys to Leveling Up Your Career​ Posted in Business and tagged career
← Work Less. Do More.Master These 5 Attributes to Successfully Influence Others →