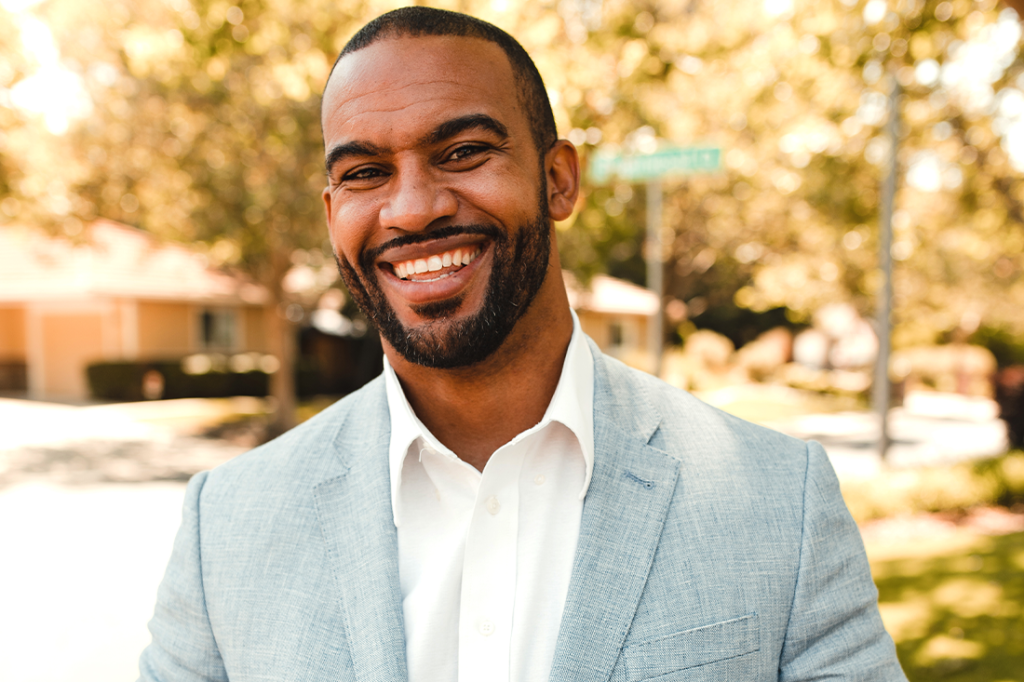 After bouncing between foster homes early in life, a young Black boy is adopted by a white family. Soon he learns to play football. Surrounded by love and support, he thrives, goes on to play in college and gets the opportunity to live his National Football League dream.

It’s a made-for-Hollywood story. Unlike the happily-ever-after ending of The Blind Side, however, Anthony Trucks most decidedly did not go on to a long and prosperous career in the NFL. In fact, for all the hardship of his upbringing, the most difficult part of his life only came after he put on a professional uniform.

Now a motivational speaker, podcast host, author and founder of Identity Shift coaching, Trucks was originally placed in foster care at age 3. For more than a decade he would be shuttled from home to home around California’s Bay Area, leaving him feeling directionless and unworthy. Trucks’ life changed for the better when at 14 he was adopted. Soon after, when he got to high school, he fell in love with athletics. It was a whole new world for him.

“I wasn’t allowed to play team sports when I was in foster care,” he says. “And I’m also the only Black kid in an all-white family of non-athletes. Like, nobody played sports. It wasn’t a thing that we did.”

But this didn’t stop him. “All my classmates would wear their jerseys to school before the game and I was like, Man! I want to be that guy!” And so he hit the football field.

“I was bad,” he says. “I was real bad. I had no skill sets, no strength, nobody teaching me at home. We didn’t even know how to put our pads in. My dad didn’t know any better. And so I went out there and I was trash.”

Trucks stayed with the sport anyway, and over time he started catching up to his teammates.

“I had some predisposition,” Trucks says. “I wanted to win. I wasn’t just this lazy guy on the couch, you know. I had a desire to do things. And I think I had some natural athleticism, but it wasn’t refined. It was kind of like a raw diamond. Here’s the thing: I am no good at any other sport but football. I’m not good at basketball. I’m not good at tennis or golf. I mean, literally anything else.”

At the age of 25 in 2008, Trucks landed a spot with the Pittsburgh Steelers. But as the saying goes within pro football circles, NFL stands for “Not For Long.” The average pro career lasts just over three seasons. Trucks’ Steelers tenure soon was over before it really started. After suffering a preseason shoulder injury that rendered him unable to play, the athlete was sent spiraling in a dark direction. He wallowed in the loss of his football dream.

“This is a thing that I spent all these years being involved in and playing, and it was now gone,” he says. “Anytime you’ve been doing something for a long period, and you wake up one day and you can no longer do it, you are met with this gaping hole. Like, who in the world am I? What do I do? How do I show up?”

Determined to do something with himself and provide for his young family, Trucks took his athletics background and kinesiology degree and opened his own gym. He became obsessed with work, as if attempting to make up for the painful grind and the riches of the football career that was no more.

The business absorbed all of his time and energy. Consequentially, his home life took a turn for the worse.

“I wasn’t a good husband. I wasn’t a good dad,” he says. “The gym business became my thing. It was all that mattered. I was at the gym from 6 a.m. to 10 p.m. My wife was at home with newborn twins and a 4-year-old. It really was not the best situation or way to be doing things.”

Trucks soon found himself in a crisis.

“All of a sudden, my marriage falls apart,” he says. “At that point I’m not a present father. I’m out of shape. The business is doing horribly. I’m not the football guy anymore. Everything that made Anthony Anthony was now gone. And when everything goes away, you’re like, well, what do I do?”

He was in a very dark place. One that nearly took his life. “I had gotten to the point of being suicidal,” he says. “I was like, I don’t want to be here.”

His life and his view of it had deteriorated slowly. But it turned toward the positive in an instant.

“A buddy of mine mentioned that I was a hero of his,” he says. “It’s really weird to have a friend say something like that. He was like, ‘We know what you’ve gone through in life and you still survived. There’s a community of people that respect you.’ ”

This inspired a shift within Trucks. “It was the first time that I thought, Well, maybe my life has some use from the craziness that’s transpired,” he says.

In that instant, Trucks realized his own personal strength and the opportunities in front of him. He started working to piece his life back together, working on his family and working to understand himself. As he did, he uncovered ways his difficult backstory prepared him for the consequential moment in his life, which allowed him to overcome deep disappointment and reverse years of negativity in an instant. He came to think of that transformative moment as an identity shift. His personal journey of discovery is documented in the book he released in August 2021: Identity Shift: Upgrade How You Operate to Elevate Your Life.

It’s a book he describes as “accidental.” Originally, he says, its lessons were just for him.

“I had this Evernote that I opened and in this one section I had identity shift concepts,” he says. “I had little bullet points, thoughts, and I would just start dumping things there. At some point, I was like, what stories of my life or stories that I found were cool would actually anchor these concepts? I just started throwing down the stories. And then I did a lot of research.… I determined what would be the best data points. I put those on a list.

“And that was it. It just kind of sat on my computer.”

What Trucks didn’t know at the time is that eventually these notes would form the basis for a unique practice for self-improvement. He now credits his ability to reckon with personal struggles to the strength he observed within his family. His adoptive mom battled multiple sclerosis for 17 years before she died.

“It got to the point where she couldn’t walk or move; she wasn’t coherent,” Trucks says. “But she really helped me become a non-statistic. She’s the reason why I didn’t up in jail.”

At his darkest hour, Trucks came to believe he owed it to his mother to renew himself in the quest to reach his potential. “I was like, I have to find a way to do right by her,” he says.

“And so I made two promises. One was that I’m going to figure life out. And then Promise No. 2 was, when I do figure life out, I’ll do what she did for me. I’ll give back to the world unconditionally, like she did for me. I wasn’t even her blood, you know? So that was the big push to go do something. And then it really got [fed] when I happened across this industry of speaking and telling your story in a way that benefits other people. I was like, Wow! There’s a world of individuals who are also battling things they don’t know how to get out of. But I do. So, what if I taught them how to do it? That was my progression to this world right now.”

When Trucks is feeling down and out, he turns to others for motivation.

“I’m really good at asking questions, or as I call it, borrowing joy from people,” he says.

On those less-than-perfect days, Trucks seeks out people who are in a better mindset than he’s in that day. “I realize that I can’t always see myself,” Trucks says. “I remember when I was playing sports, I would ask coaches what I needed to work on. Or in my marriage, there were situations that fell apart and when I really wanted to improve it, I was like, What do I have to do?

“One of the things I found I was good at is taking insight that I don’t like to hear, because I understand the heart it’s coming from, and the use for it.”

Through the process of asking people to look at him and his actions, he believes he is able to better see himself.

“Sometimes it hurts to hear it,” he says. “But I can put the ego aside just long enough to find out the validity of the statement.” He says when the observations are valid, and come from people he trusts, he’s able to suppress his ego in order to work on bettering himself, and subsequently, his life.

Trucks believes that our egos are among our greatest potential advantages. The ego, he says, “protects the current identity that we have. Whatever you identify as, your ego will protect it.”

There is a flipside to this, however.

Trucks’ Evernote musings revealed several life events that could have knocked him down for good, from being shuffled through the foster care system for most of his childhood, to his football career ending with an injury, to the separation from his wife and kids. But he’s still standing. And for this, he credits upgrading his identity.

“I navigated a lot of ups and downs and somehow got through it,” Trucks says. “I unpacked and realized that there was a unique kind of golden thread through it all.”

That golden thread was Trucks’ ego.

“The longer you have that ego protecting a crappy identity, the longer you are stuck,” he says. “You’re in a perpetual cycle, because you’re never doing the things to get better in the areas that are hindering your growth.”

His ego had allowed him to persevere through hard times, but it kept leading to more hard times and a roller coaster of highs and lows. He needed to confront his ego and turn it on its head in order to make the life-affirming identity shift: granting himself permission to move on, happier, healthier and with his whole self.

This article originally appeared in the January/February 2022 Issue of SUCCESS magazine. Photos courtesy of Anthony Trucks

Posted in Future of Work, Success
← What Would You Do with an Extra Hour in Your Day?I Stopped Chasing Money—Here’s What Happened →