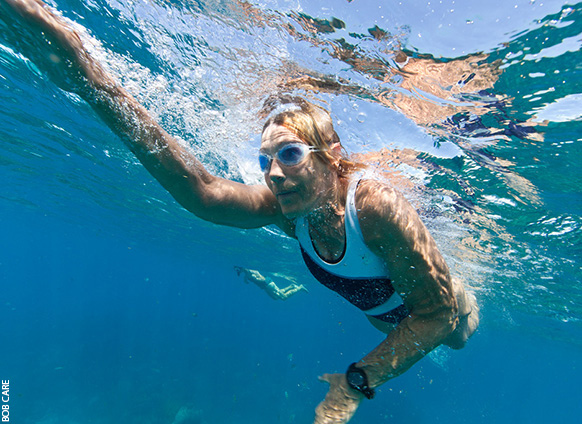 Look in the mirror—that’s your competition.

Related: John C. Maxwell: Are You Stretching toward Your Goals or Just Coasting?

Thinking about that adage the other day, I remembered a talk by swimmer Diana Nyad. Turning 60, Nyad was driving and saw her eyes during a glance in the rearview mirror. The moment prompted introspection on what she calls “the one that got away.”

Her most coveted goal was swimming nonstop from Florida to Cuba. In her 20s, she had attempted it after conquering several other long-distance challenges, but the 111-mile stretch through shark- and jellyfish-infested water defeated her.

While many of us would be enjoying our newly acquired senior discounts, Nyad was returning to the water. She hadn’t swum in 31 years, not a stroke, she told her audience. But that face in the mirror was determined. She spent hours at a time in the water training—eight, 10, 12—to regain her strength, stamina and technique. She finally thought she had reached 15 hours, but her trainer clocked her at 14 hours, 58 minutes and told her not to worry about the two-minute shortfall. Nyad would have none of it. She jumped back in and swam until the stopwatch hit 15:00:00. That’s commitment!

To reach your personal best, you need to learn how to challenge the person the mirror. He or she is your toughest adversary. Discovering how to overcome your limitations, fears, self-doubts—and the tendency to write off those last two minutes in the pool—will do more for your development than defeating a dozen competitors. Here’s what to do.

I love to win, and you probably do, too. It’s natural to make winning your ultimate goal, like a sports team hungering for a championship ring or a swimmer wanting to set a record. But you have to be careful about directing too much energy into one goal, like Nyad’s late-in-life swim.

If you obsess over a singular event, what happens if you lose? Or for that matter, what happens after you win? Ever heard of a Super Bowl hangover? A lot of times, the champs flounder the next season.

That’s why I like to concentrate on growth rather than goals: That game is never over. We’re not distraught if we’ve lost, and we haven’t peaked if we’ve won. There’s always room to improve.

Nyad’s career was actually a succession of accomplishments: She had broken the women’s world record for a 22-mile swim from Capri to Naples, Italy; shattered the top time for swimming around Manhattan by an hour; and trounced the open-ocean world record for men and women in a 102.5-mile swim from the Bahamas to Florida. She grew, setting new marks time and again.

Would anybody have thought less of her if she never again put on a swimsuit? Of course not. But she saw an opportunity to grow further and set a new standard—for swimmers and for all of us worried about the limits of aging bodies.

She met that goal and set another: Nyad and her Cuba swim expedition leader Bonnie Stoll have founded EverWalk, a campaign to improve health by walking. Nyad and Stoll call it the “biggest walking initiative in American history.”

Anyone who has tried to lose weight knows fixating on the big number is a sure way to fail. Twenty pounds is intimidating—and discouraging when the scale seems to barely budge; 2 pounds is manageable. Achieve a 2-pound goal 10 times, and you drop two sizes and earn a shopping trip.

Yes, emphasizing growth over goals is critical, but goals do have their place in competition. I think of them as milestones on the journey of growth. Set incremental ones—as with the weight-loss example—and celebrate each time you achieve one before moving to the next.

Developing small disciplines helps. As part of my daily work routine, for example, I read or listen to someone else’s teaching with a goal of capturing at least one quote to use in future speaking opportunities. Salespeople make phone calls daily, touching base with past clients and reaching out to prospects; the most successful ones have the discipline to make a set number of calls daily, with an occasional challenge day in which they push themselves to dial a few more.

Big success tomorrow depends on the little things you do today.

When I was growing up, my parents encouraged me to find the one thing I did best and channel my energy toward it. This was incredibly liberating. I didn’t have to worry about being all things to all people. I could simply grow my given talents, pushing myself to be better and better.

Countless athletes play multiple sports as kids. But the ones who go on to play in college or professionally almost always give up a sport they play well to focus on one in which they can become great. The same applies to you: Identify your natural strengths and pursue them with passion.

Research bears this out. For years, Gallup has studied the advantages of developing strengths instead of trying to fix weaknesses. One finding: People who use their strengths every day are six times more likely to be engaged on the job. You won’t push yourself to new heights if your heart isn’t in your work.

4. Partner with other winners.

Learning to push yourself is critical. But it’s easy to lose sight of how well you’re doing or pinpoint your weaknesses if you depend only on your own perspective.

The solution? Get a mentor. I’ve had the privilege of being coached by some of the brightest people in their fields. It is amazing how much difference their insight and advice make. Years ago while working on my first book, I was lucky enough to partner with publishing professional Les Stobbe. I sent him samples of my work and asked for his opinion because I was worried about the quality. I appreciated his writing tips (and I’m sure my readers did, too!), but what I really valued was his encouragement. Largely because of him, I pushed myself to write and write and write. I can reach a far greater audience in print than I ever could as a speaker.

Back to Nyad: Her quest initially failed. Jellyfish attacked. Their stings felt like fire, and their poison started to shut down her respiratory system. At the time, she said her dream was crushed.

Only it wasn’t. Those slimy critters didn’t extinguish her competitive flame. In another attempt in 2013, at age 64, she swam from Key West to Havana—the first person to do so without a protective cage. Nyad had vowed to find a way, and for her triumphant effort, she wore a suit and mask that protected her from stings.

“Never, ever give up,” she said in interviews following her feat.

We can all live by those words.

Posted in Personal Development
← Enter to Win a 3 Month Coffee Subscription to MistoBoxTop of Mind: 6 Ways to Stay Ahead of the Competition →