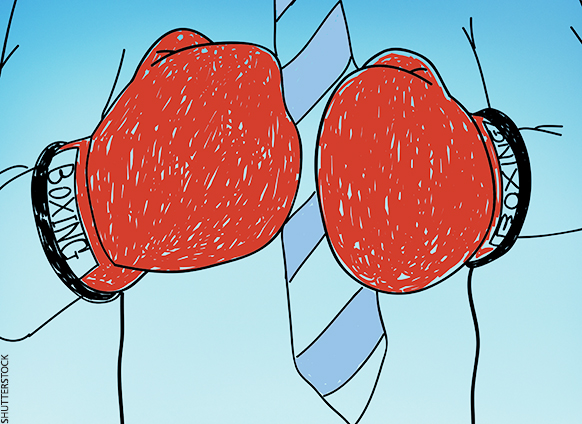 Nasty emails flying back and forth. Death stares in the break room. Steely tension in meetings. Side-taking. Tattle-taling. Sabotaging.

This is the stuff of employee conflicts. “Every day—from piddling office bickering to full-out wars—disagreements between colleagues happen,” says Hank Boyer, president of consulting firm Boyer Management Group. While interpersonal disagreements may be normal, they’re also costly. One study by the publishers of the Myers-Briggs Assessment and the Thomas-Kilmann Conflict Mode Instrument found that U.S. workers spend 2.8 hours per week dealing with conflict, which equates to $359 billion in wasted wages based on average hourly earnings of  $17.95.

To nip these inevitable feuds in the bud—or better yet, stave them off altogether—follow these 11 tips:

1. Recognize that disputes can’t be avoided. “Based on your personality type, there will always be people who are going to be annoyed just because you walked in the room,” Boyer says. Once you accept that conflict is inevitable, you can devise a plan and acquire skills to deal with it.

2. Step in early. “The most insidious conflict is the latent passive-aggressive kind,” Boyer says.

3. Don’t just tell people to get over it. “That is like telling a 5-year-old to stop jumping up and down,” Boyer says. If your employees were capable of solving the issue without intervention, they would have. If a disagreement has gotten to the point that workflow has slowed, halted or—worse—affected clients, you must step in and mediate.

4. Make each person acknowledge the other. This should include asking the parties to face one another and articulate what the other person does well and listen to the other’s point of view on the matter at hand.

6. Tell them to come up with the solution. Sometimes tensions are so high that you must lay out a plan. But if the previous exercises have melted the ice, it is always better to empower people to solve their own issues. This also eliminates any appearance that you are picking sides.

7. Assist them in articulating a plan for resolving the conflict, including follow-ups in the days and weeks ahead.

8. Skirt instincts to separate the warring bodies. Instead direct the pair at odds to work in tandem on a project—much as parents of quarreling school-age siblings will force the children to stand together in a single, adult-sized T-shirt until they figure out how to get along.

9. Unite them in solving a crisis bigger than their argument. “Ask them: ‘Revenue is down. What can you do to improve our bottom line?’ ” An unhappy client or unaffordable overhead might be the “higher calling that snaps them out of their disagreement,” Boyer says.

10. Invest in personality assessments, which improve understanding and communication in workplaces of all sizes. Popular tests include DISC (assessing dominance, influence, steadiness and conscientiousness), Myers-Briggs and the Caliper Profile. Boyer, who is a DISC fan, says the test helped one company where managers were frustrated by their sense that they could never satisfy the CEO. Once the CEO’s personality profile was revealed, the staff learned he was extremely analytical and was naturally inclined to question everything. As a result, they understood that his relentless inquiries about their work weren’t intended as criticism but were a personality trait that they learned to indulge for better office relations.

11. Create a process for dealing with conflict. Devise a system by which irritated employees are instructed to address interpersonal annoyances immediately and face to face. Training managers and staff in a method of mediation or conflict resolution is also helpful, creating a single framework by which the entire office deals with disagreements.

Takeaway: Get creative with a solution and create a win-win-win with the client in mind.

Two of my best salespeople had great relationships with different key people within a very large national mortgage broker. As word-of-mouth referrals in that broker’s office grew, so did disputes over which salesperson was entitled to the commission. Both would complain to me privately and then argue with one another in my office. It got pretty heated; emotions were high.

I am a real estate attorney and have had thousands of employees over time. I have learned what works, and I’ve made lots of mistakes. This was a tricky situation. I had to do what would make my clients happiest, set a precedent for the rest of my staff and be fair to the employees at hand.

Ultimately I established that both salespeople would keep their original clients and then split commissions from any additional clients 50-50. As a compromise, because they were now making less commission on each contract, I offered a one-time benefit of a few extra percentage points out of my pocket on each deal that they signed.

It worked out better for everyone. They began working as a team, not as cutthroat competitors. My client now had two key account representatives to depend on. And we ended up gaining much more market share out of that entire office because of the team effort. This experience also set a great example for the entire company: Anything can be worked out.

Takeaway: Get the entire company onboard with a mediation practice.

Our sales and production managers got into an email dispute that escalated into a shouting match in the conference room. The essence of the disagreement was over whether content for one of our clients should be driving revenue directly or should be more focused on journalistic integrity. This cost us two hours in emails, and we risked missing a day of production.

When I looked at the snarky email exchange, I realized it was the best possible scenario for a business owner: Both managers were entirely committed to their jobs and the best interests of the clients. They were arguing nuances.

I sat them down and asked them to share what they thought the other did well. They were both effusive and sincere in their compliments. Then I asked them: “What are we trying to accomplish here? How can you do that?”

From there, a resolution naturally fell in line, with each side compromising and suggesting ways to make the project work.

Because this mediation was so successful, with the managers’ permission we shared it as a case study with the rest of the company and used it as the basis for creating a system for dealing with conflict. I have studied mediation and conflict resolution informally through reading and seminars. Half of my job as a CEO is conflict resolution. As a result of the conference room fight, my operations manager went through mediation training. When someone senses tension with a colleague, our staff is instructed to pick up the phone or address the person face to face and head it off. If that doesn’t work, the parties are directed to quickly call in the operations manager, who is now trained in resolving the situation amicably and quickly.

Someone still has to come in once in a while to make tough decisions that settle disputes, but people are much happier if they can resolve their own problems. Since outlining a way to do that, it has minimized the rumblings in our office.

Conflict: Employees with similar job titles were embroiled in a turf war.

Takeaway: Everyone needs to feel empowered over a domain. Provide one.

Within a period of a few months, we hired two public relations professionals to build out our most successful marketing strategy: connecting with online influencers and publications to build inbound links to our site.

Each of these men, both of whom had the title “PR representative,” were charged with building relationships with editors and social media stars as well as writing blog posts for our own site. One was assigned to focus on lifestyle topics and the other to specialize in technology topics.

Almost immediately they weren’t just competing but trampling each other. It wasn’t clear where the lines were drawn between tech and lifestyle. Frequently they both contacted the same bloggers or YouTube stars and then quarreled over who reached out first. They wrote blog posts so similar as to be redundant. Their feud made for a toxic work environment, with time wasted bickering with each other and complaining to me, and with confusion over media professionals we sought as partners. Ultimately the situation resulted in low productivity.

In a perfect world, I could have told them to grow up, be big boys and get over it. But that wouldn’t work because they both have strong, leader personalities, and each needed to feel empowered to do his job without being second-guessed.

Finally I came up with a solution: I created higher, distinct job titles for each one. Our lifestyle expert became the creative director, and our technology specialist is now search engine optimization director. I told them, “You are both very important pillars in the company and very good at what you do.”

As a result, it’s now clear which of the directors handles different media prospects. They attend different trade shows, and there is now a system for managing the blog; they both write on topics specific to their territories, and the SEO (search engine optimization) director uploads the posts without questioning or editing the creative director. The net result is that they are much more collaborative, the negativity has dissipated, and the number of inbound links has soared.

Why do good leaders love office conflict? Because it can fuel innovation, growth and problem-solving. Learn the tactics to encourage and harness healthy conflict.

This article appears in the September 2015 issue of SUCCESS magazine.

Emma Johnson is an award-winning business journalist, and founder of the world's largest community of single moms, WealthySingleMommy.com. She is also host of the podcast Like a Mother, a popular public speaker, and author of The Kickass Single Mom: Be Financially Independent, Discover Your Sexiest Self, and Raise Fabulous, Happy Children (Penguin, Oct. 2017).

Posted in Business
← 4 Stand-Up Ways to Get People’s AttentionTop of Mind: 5 Ways to Be More Confident in Yourself →