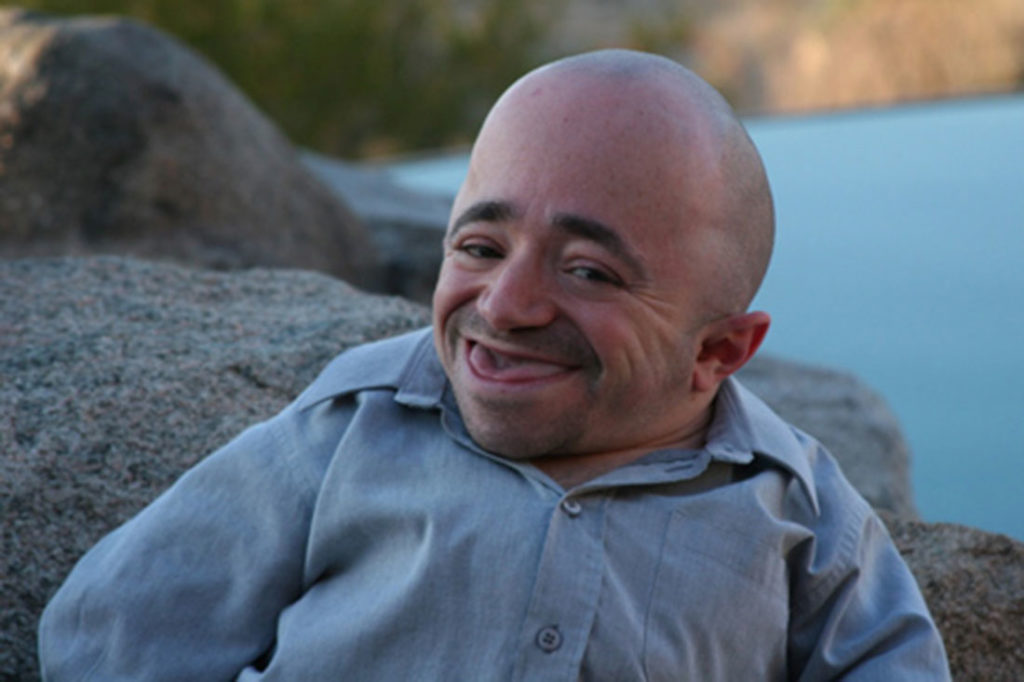 It’s 7 a.m. and Sean Stephenson is in Go Mode. When he finally gets a couple of hours’ sleep, some 18 hours from this moment, he’ll have spent an hour in the gym, packed, rushed to the airport, taken a car service to his speaking engagement, met with VIPs and the execs who hired him, inspired 10,000 people, grabbed a ride back to the airport, and landed in a new city so he can do it all again tomorrow. That’s Go Mode.

Just reading his itinerary is exhausting. But for Stephenson, every moment in Go Mode is a challenge. The world-famous therapist, motivational speaker and best-selling author is afflicted with osteogenesis imperfecta, a genetic disorder commonly known as “brittle bone disease.” Doctors expected him to die shortly after birth. Although he proved them wrong, the 33-year-old has suffered more than 200 fractures and stands just 3 feet tall. He is wheelchair-bound and needs assistance with simple tasks—getting out of bed, taking a shower, getting dressed. Go Mode can’t let those tasks get in the way—and neither does Stephenson.

“It takes a lot of energy to have the career I have,” Stephenson says. “Every day is dramatically different. Let’s face it—I have a condition that causes me to use a wheelchair. I have to go out of my way to be in shape to handle that workload.”

As a boy, Stephenson wasn’t ready to handle much. He couldn’t walk and was in near constant pain. Angry and bitter about his condition, he dwelled on the limits that his illness forced on him.

That changed on Halloween morning 1988. Stephenson was preparing for his favorite holiday when he caught his leg in a door, snapping his limb and leaving him in hysterics. His mother asked him the question that changed his life: “Is this going to be a gift or a burden?” Suddenly Stephenson’s perception changed.

He was ready to listen, but the anger didn’t disappear right away. Stephenson longed to play sports, for instance, and was still frustrated by the obstacles that littered his life. His father taught him to see obstacles simply as tools—blocks to climb on so he could reach higher.

His dad said there would be many things Stephenson couldn’t do because of his disability, but he shifted his son’s point of view. “ ‘If you focus on what you can’t do, you’ll be miserable, son,’ ” Stephenson quotes his father as saying. “ ‘Focus on what you can do. You can’t be a point guard in the NBA, but most people can’t. But if you work hard enough, you could own an NBA team.’ ”

Stephenson doesn’t own a National Basketball Association team—yet—but he has certainly left his mark. He earned a bachelor’s degree in political science and went back to school to earn his doctorate in clinical hypnosis. Stephenson has written two best-selling books (including Get Off Your “But”: How to End Self-Sabotage and Stand Up for Yourself, with a foreword by his mentor, Tony Robbins); set up a successful private practice; worked for President Bill Clinton; and hung out with the Dalai Lama, Richard Branson and Oprah Winfrey. Oh, and he earns up to $30,000 per speaking engagement.

Deadlines, his practice, traveling the globe to inspire people—that’s Go Mode. And it comes with a price. “Actually, there’s way more Recovery Mode than Go Mode,” Stephenson says. “Recovery Mode is a massage therapist coming over to work on me or going to Whole Foods and picking up fresh food or having a chef prepare my meals. It’s sitting down and figuring out what nutrients my body needs or going on a retreat. I just finished a 24-hour period where I was silent. I was just quiet the whole day just to get my body and my mind to be calm and serene…. Recovery Mode is exercise to repair and rebuild my body to get it ready for the next trip.

“No one ever sees Recovery Mode. They just see Go Mode, and they’re impressed because they think it happens naturally. But it doesn’t.”

Even Recovery Mode doesn’t come easy for Stephenson. His house is retrofitted to help him be as independent as possible. He cooks with camping gear because it’s small enough for him to handle; he uses a blender to make smoothies. His house has ramps, not stairs, and his shower and toilet are equipped with special seats. He travels with a backpack filled with grabbers and tools so he can reach everything from a dropped pen to elevator buttons.

Now Stephenson is ready for his next great challenge—marriage. He wed fellow life coach Mindie Kniss on Sept. 14 in Chicago, where he has always lived. That, too, will change, as he relocates to Kniss’s home in Phoenix.

“I’ve lived at home my whole life,” Stephenson says. “I’m very much tied into my family, which is wonderful and helpful in my development as a man. When she showed up, she began to nurture my freedom and independence. So she’s been a big part of me branching out and getting further out. I wouldn’t have considered moving across the country away from my mom, dad and sister, but now we can make the leap together. It is a wonderful opportunity for me to be out of the cold weather and declare my own space in the world.”

The transition to partnership has been eye-opening for the outgoing Stephenson. Kniss is introverted, and the two have worked to get each other out of their comfort zones.

“My wife taught me not all introverts are weird, recluse loners. There’s a beautiful side to introverts, and I’ve fostered my introverted side…. Now I am far more comfortable with my introverted side. I will go for a walk by myself or read a book and not feel the need to pick up my phone and check on things, check my email, and connect with the outside world.…

“She’s been a big advocate for me to really go within to get my answers,” Stephenson says. “Whereas I’ve spent my whole life looking outside for answers—gurus, experts, etc.—she’s made me comfortable in finding my own inner wisdom, my own guidance. If you switch it around, she’d say that comes naturally to her, but she’s learning from me to reach out to your community, to your partner, to get guidance and support. It certainly changes who you are.”

Well, almost. Stephenson wanted to broadcast the wedding live so friends, fans and the curious could look in on the nuptials. Kniss, the introvert, declined, saying the day should be special. Undeterred, Stephenson will record the wedding with the hope of presenting it online and at future speaking engagements. You know, Go Mode.

This article originally appeared in the December 2012 issue of SUCCESS magazine.

Articles
Posted in Success
← Should You Trust That Man?Sean Stephenson: “Go for the GAP, not the FED.” →