Getting People to Think Your Idea Is Their Idea

How do you get someone to buy your product, adopt your idea or go with your plan? You have to convince them that the idea isn’t yours, it’s theirs, says Oren Klaff, an expert on selling ideas. In Flip the Script, he offers steps to pressure-free persuasion.

How do you push someone without being pushy? You start by getting your audience to pay total attention and take you seriously—you establish status. Then you show them you’re an expert, and once you’ve done that, only then do you explain your big idea.

Klaff claims his process works as well in the boardroom as it does at the dinner table with your veggie-hating kids. (August; Portfolio; $26) 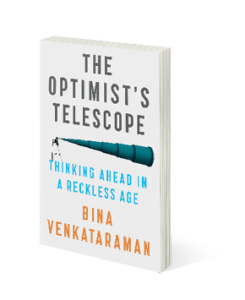 Thinking Ahead in a Reckless Age

A few years ago Bina Venkataraman got a rash after going for a hike in the Hudson Valley. She made a note to get it checked out, but her 16-hour days dominated by deadlines led her to forget about it. That is until her knee swelled to the size a grapefruit, and she found out she had Lyme disease.

Of course, Venkataraman’s book isn’t about recognizing the symptom of Lyme disease, it’s about how we make short-sighted decisions not just in our personal lives, but in business, government and society.

Using examples from real-world stories and new science, Venkataraman provides readers with ways to do this such as changing our perspective, looking beyond short-term targets, creating immediate rewards for future goals, and designing better institutions. (August; Riverhead Books; $28) How to Fuel Success, Create Happiness, and Conquer Anything

Zack Friedman doesn’t want you to read his book if your life is perfect, if you’re trying to get rich quick, if you expect your problems to be solved overnight or if you prefer style over substance. Also, don’t read his book if you don’t like lemonade, he writes.

If that sounds like you, dive in. Friedman offers a five-step process for achieving more. He carefully explains each step, and how to implement changes in your life, in accessible, easy to understand language. (August; HarperCollins Leadership; $28) How to Live, Learn, and Thrive Outside the Lines

Jonathan Mooney didn’t learn to read until he was 12. Growing up, he faced several challenges including dyslexia and ADHD.

So what changed? Mooney shifted his perspective about what being “normal” really means. “Normal is a false standard for human value,” Mooney writes.

In Normal Sucks, Mooney shows readers how they can reshape their own ideas about normalcy. He does this by sharing his own stories about his challenges, but he also brings in an impressive litany of resources and research. (August; Henry Holt and Co; $26) An Unconventional Approach to Modern Mindfulness

“No matter how frustrated or hopeless I’ve felt, I always had a small ember of hope in my heart that refused to be extinguished by the cold rain of life,” Cory Allen writes. “I kept believing, putting one foot in front of the other, and finding my way to more peace. More beauty. More love. More life.”

Allen, the podcaster behind The Astral Hustle, offers practical advice on meditation, moving on from the past, being kinder, and more. He also provides several exercises readers will find useful for learning how to relax and live in the moment. (September; TarcherPerigee; $25) How to Pivot Toward What Matters

No matter what you’re dealing with, change isn’t easy. In A Liberated Mind, Steven C. Hayes, Ph.D., writes about how you can successfully alter your course no matter what your issue is, be it anxiety, depression, substance abuse, PTSD, relationship issues and beyond.

Having dealt with his own problems, such as panic attacks, Hayes deftly explains how to pivot by creating habits, accepting vulnerability and changing perspective. But he doesn’t just draw on his own experiences; Hayes’ book is densely filled with references, research and analysis.

Hayes also discusses how the media, society and even conventional personal development impacts our ability to pivot. (August; Portfolio; $27)