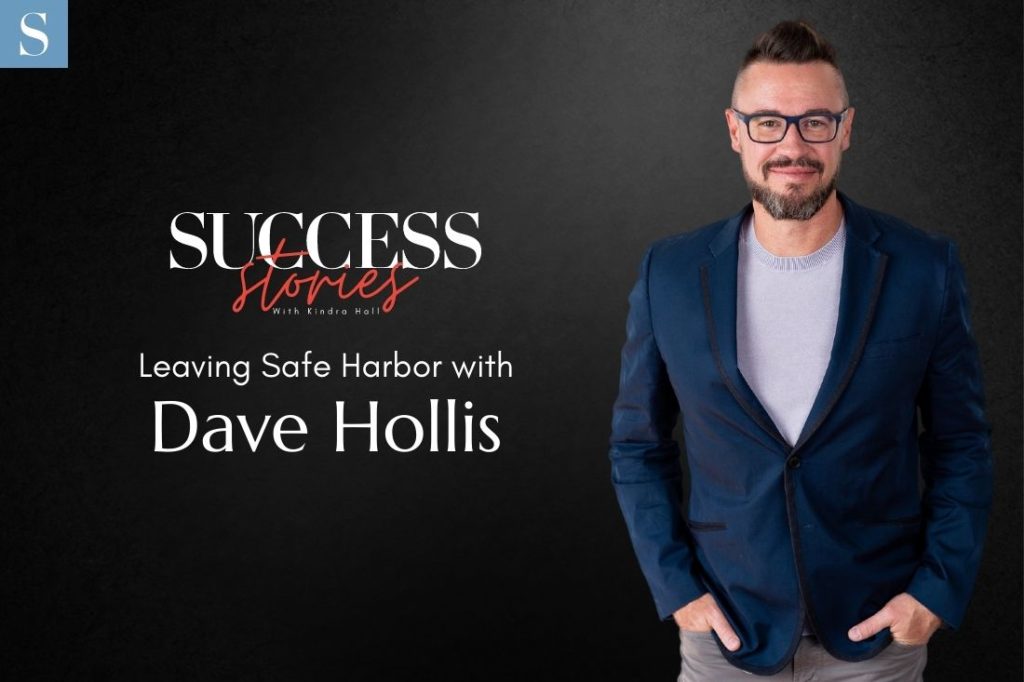 When the life plans you thought were solid suddenly fall apart, the blank slate left behind feels like a terrifying abyss of nothingness. It also represents an incredible opportunity.

Career coach and New York Times best-selling author Dave Hollis knows what it’s like to go from cruise control to freefall. In 2018, he left his role as president of worldwide distribution at Disney to build a company with his then-wife, New York Times best-selling author and speaker Rachel Hollis. Then, in 2020, Dave and Rachel announced their divorce.

“Almost everything that I thought would be there forever was now not, and that death—in a crazy way—was freedom. It gave me permission to cast any vision: I could reconnect with why I was actually on this planet, and what chasing after my dreams or sailing off my map might look like,” Dave says.

He’s since released his second book, Built Through Courage: Face Your Fears to Live the Life You Were Meant For. His first children’s book, Here’s to Your Dreams!, is scheduled for release in February 2022.

In this episode of SUCCESS Stories, chief storytelling officer Kindra Hall talks to Dave about working toward the purpose you were created to pursue, giving your emotions human names and the transition from five-year plans to making it through lunch.

Draw a map to lead you to your purpose.

You are the only person who has your genes, your experiences and your talents, and Dave believes you were given that unique combination of traits for a specific purpose. Once you understand your purpose, dedicate your life to achieving it.

Picture it like a lighthouse: Now that you can see it, you can draw a map to guide you toward it. That map is made up of all the tools you’ll need, and the tasks you need to accomplish to get there.

Caution: make sure it’s your map that you’re on. When Dave was running a company with his then-wife Rachel, he realized he wasn’t moving toward his own dreams. He was on her map.

It’s not just partners who can unintentionally sidetrack you. You might also follow a map laid out by your parents, your employees or even society.

How can you tell? If you’re working toward what you think is your purpose, but you still feel unfulfilled; or there’s something else you’re drawn to but keep ignoring, that’s a sign the destination you’re trying to reach may belong to someone else.

Comfort is appealing but only challenges help you grow.

Staying with the lighthouse and map metaphor, picture your comfortable option—your steady job, your relationship, your hometown—as a harbor. Ships are safe from the most violent storms and the deadliest waves in a harbor. But ships were built to leave the harbor. It’s the only way you’ll discover new destinations.

For a long time, Dave assumed that when he achieved his goals and found stability, he would feel fulfilled. But when he finally got there—he was a Disney executive, at the top of the industry he’d always hoped to work in—he realized it wasn’t the goal itself that had inspired him to jump out of bed every day; it was the effort and lessons required to achieve it.

It’s normal to long for security, but it won’t help you grow. The only way to challenge and push yourself is by trying new things that are outside of your comfort zone.

Make the next right decision.

Before his divorce, Dave believed he had the next five years clearly mapped out. When that part of his life was pulled out from under him, he found himself in a position where he wasn’t even sure what the following morning looked like.

Dave took the rebuilding process slowly. He had to prioritize all aspects of his health. He broke it down into five categories:

For each one, he mapped out two or three goals at a time. Sometimes they were 90-day goals, and sometimes they were just for that day. Instead of trying to think five years ahead, he focused on making the next right decision.

Over time, Dave started to build a new vision for his life, one that was actually an improvement, health-wise, on what he’d previously believed lay in store for him. Gradually, he was able to plan further into the future.

Blank pages are intimidating when you’re first faced with them. But if you start with one word or one pencil mark at a time, you’ll be surprised how quickly it can shape into a plan.

Naming your emotions creates a space between you and them. You are not the emotions themselves; you are simply observing them.

This distance makes it easier to create a dialogue with those emotions. In turn, it becomes easier to assess why they’re happening and how to deal with them.

To be clear, this doesn’t just mean naming how they feel, with words like fear, sadness and guilt. We’re talking about giving them human names.

For example, Dave calls his anxiety Clark. “If it sounds woo-woo, just go with me for a second: it changed my entire life,” he says.

Dave understands that like all of his emotions, Clark is trying to be helpful when he shows up uninvited. When that happens now, instead of getting overwhelmed, Dave asks Clark why he’s there.

Typically, Clark’s purpose is to point out aspects of Dave’s life that are mired in ambiguity. Clark is not a fan of ambiguity.

As frustrating as Clark can be, once Dave understands the reason for a particular visit, it pushes him to address whatever problem Clark is pointing out. He’ll make a plan, which removes the ambiguity, while also helping Dave make progress with whichever area of his life was affected.

Clark is happy and goes away, and Dave is happy that he’s moving forward on his map.

Articles
Posted in Podcasts
← What 3 Creative Masters Can Teach You About SuccessHow to Get Published: 3 Tips for Breaking into the World of Thought Leadership →