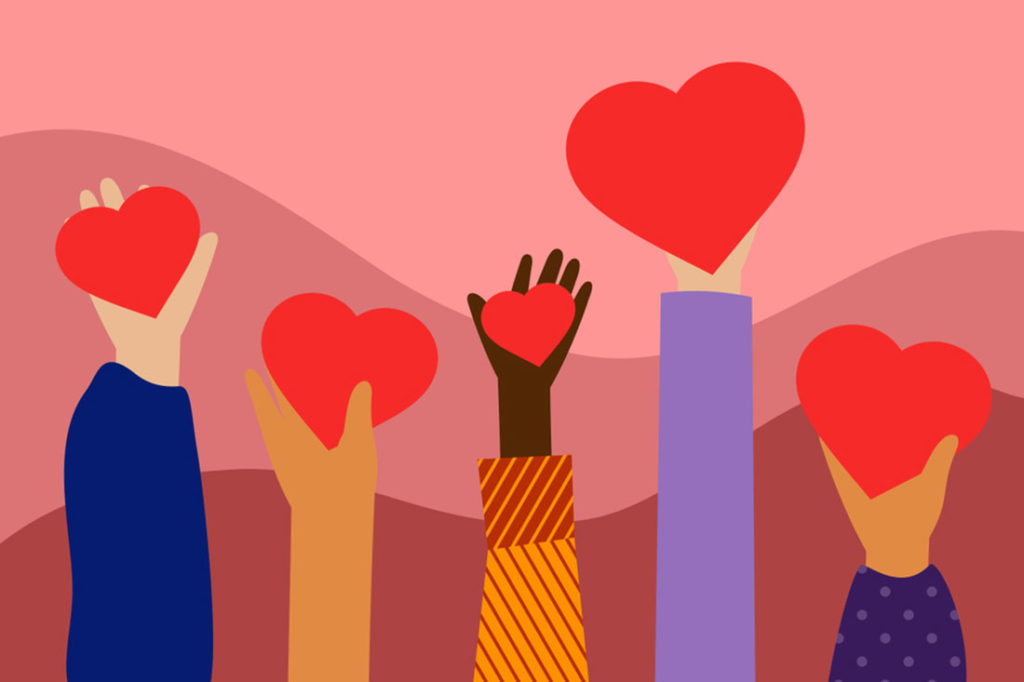 Ever find yourself inside one of those moments that beautifully remind you you’re exactly where you’re supposed to be?

This occurred for me in November while walking my 38th mile over the course of a three-day, 50-mile charity walk for multiple sclerosis (MS) in support of my mom, who was diagnosed with MS in 2008. Nearly every year since, I (gently) hassle my friends and family for donations so I can meet the $2,500 fundraising minimum to participate in Challenge Walk MS, and then proceed to walk an ungodly number of miles in a very, very short amount of time. To date, I’ve walked 450 miles for my mom.

As you can imagine, after mile 32-ish, you’re hard-pressed to find a part of your body that isn’t hurting. So on that hot, cloudless day in San Diego, my aunt and I created our own “’unofficial rest stop” at World Famous PB for a quick craft beer to boost us through the last few miles of the afternoon. When we asked for the check, our waitress said the table behind us covered our tab as a way to say thank you for walking.

I was touched, perhaps abnormally so. Over the years, this annual walk has surprised my family and me in the way it has helped us heal after a disorienting diagnosis, and brought an unexpected amount of purpose to my life—so much so, last year I decided to quit my agency job to work for the National MS Society. To have someone I’ve never met support me in this journey to find a cure for my mom filled my heart in a way I never would have predicted. Nor could these strangers know their small gesture would leave such a lasting impact.

It made me think of the butterfly effect; the origin of chaos theory and most commonly referenced in pop culture in relation to time travel, it’s the idea that one small act has the ability to exponentially change how history unfolds over the course of time. What if random acts of kindness work this way?

When Marcus Anwar stood in the checkout line worried he might not be able to afford all of his groceries, he whispered his concerns to his then girlfriend, now fiancée. It was November 2015, and he was in the process of starting his business ohmy.ca, a classified buying and selling site; money was tight. However, the man ahead of him told the cashier to add Marcus’s groceries to his bill—totaling $200 dollars extra.

“I told the gentleman, ‘Thank you, but you don’t need to do that,’” Marcus recalls. “But he responded, ‘Young man, I have been where you are, don’t worry. Just keep working hard and stay motivated, you will make it.’ I was speechless, and even now, I remember what he did for me like it was yesterday. I will never forget it.”

Marcus used the money saved on groceries to hire a graphic designer who went on to play a key role in the success of his business. A person whom had he gone without, Marcus feels his business would not be what it is today.

In the ‘70s, a 17-year-old Frederick Shelton found himself homeless at the start of winter. He didn’t know where his next meal would come from or how he would weather the night. Seeking shelter and free coffee and donuts, Frederick wandered into a Methodist church for the first time. Upon meeting, Reverend Clint Jordan invited Frederick to stay in his home with the rest of the Jordan family—a temporary guest “visit” that lasted six months until Frederick was old enough to join the Navy.

“That first night I was scared to death,” Frederick says. “I didn’t sleep at all. I kept waiting for them to come tell me they’d made a mistake and that I had to leave. I don’t remember how long I felt that way, but it was at least a week.”

Thirty years later, Reverend Jordan ordained Frederick’s wedding ceremony and the pair still keep in touch. After the Navy, Frederick went on to open and successfully run his own firm as CEO of Shelton & Steele LLC.

At times, accepting kindness from a stranger goes against everything society has conditioned us to believe. (Stranger danger!) And while there’s certainly enough cautionary tales to warrant pause, there seem to be plenty of good Samaritans to remind us of the importance of keeping our hearts from turning hard. Something Brittany Paquet learned firsthand nearly 10 years ago after she experienced a nightmare all southern Californians hope to never encounter—getting a flat tire while on the freeway.

“I had absolutely no idea what to do because it was my first flat,” Brittany recalls.

She had pulled off at the next exit and into a nearby parking lot to assess the damage when a man pulled into the spot next to her, seemingly out of nowhere. He jumped to action and changed her flat in less than 10 minutes.

“I very quickly went through my purse to see if I had cash to offer, but when I looked up he was gone. Poof. Like he was never there,” Brittany says. “It was right around the holidays, so to this day I swear I’ve met a Christmas angel.”

While we might not all have the skill set to change a flat tire, even the simplest gestures are powerful. App developer Joe Flanagan remembers a day that began miserably—he was stressed, running late and in an altogether terrible mood. Until he saw an anonymous note on his windshield that read, “You matter.”

“I have no idea who left that, but it was exactly what I needed,” Joe says. “It’s inspired me to leave a kind note for other strangers for no other reason than to help make their day like this did for me.”

Joe is not the only one who’s since felt compelled to pay it forward after being a recipient of a random act of kindness.

Writer Melanie Musson and her husband decided to splurge and dine out after a fun afternoon with their two daughters; a rare occurrence since feeding a family of four can become expensive. However, when the server brought the bill, he explained another patron paid for their meals.

“Our server told us that it was the anniversary of the patron’s wife’s passing, and he wanted to honor her by paying for our meals,” Melanie said. “He could tell our love was real and wanted to remind us how special that is. I was genuinely overwhelmed by the story.”

Occurring more than seven years ago, Melanie thinks of the evening every time she passes the restaurant, which is typically three days a week.

“I tend to get wrapped up in whatever I’m doing and often fail to even notice others around me. This act of kindness made me consciously see others,” Melanie explains.

Which as fate would have it, when you truly see others, you also tend to help others. Melanie likes to regularly buy coffee for strangers. Marcus and his fiancée pass out four $250-dollar prepaid cards to people in need at grocery stores every Christmas. Frederick regularly has “house guests” who need a place to stay and feeds the homeless year-round in Las Vegas where he now lives. It appears kindness is quite contagious.

Street musician Natalia ‘Saw Lady’® Paruz has been playing the musical saw on the corners of New York City for years and says witnessing someone act selflessly kind toward a stranger changed her perspective on humanity. While playing at the Times Square subway station, she noticed a blind man join a group of passers-by gathered around her. His face lit up with joy at the sound of her music, and a woman from the crowd took notice. She purchased a CD right away, walked over to the blind man, put the CD in his hand and said with a gentle smile, “This is the music you are hearing now. This is for you.”

“New York gets a reputation for being a place where people don’t care about one another. But this incident showed me this couldn’t be further from the truth,” Natalia says. “In actuality, people are kind, friendly, and they care to the point of demonstrating their love for their fellow people with action. As a street performer, I’ve learned that people just want to connect.”

There have been moments in my own life, big and small, that touched me due to nothing other than someone else took a moment to show they cared. So many times in our busy schedules we walk past someone in need and *wish* we could help, while our legs carry our good intentions in the opposite direction. Good intentions, while wonderful, don’t change lives. Yet as these stories show, even the smallest of actions do. The impact of random kindness ripples out into the world and like dominoes, it builds a momentum that could spark transformations in the lives of countless others.

In a world where too many are quick to point out differences, let us take the time to see, and deeply care, for our neighbors. It may at first be uncomfortable, but in the end, love hardly ever is.

Related: How 30 Days of Kindness Made Me a Better Person