At the final sales meeting of their 2012 calendar year, a company CEO got up in front of his sales staff and announced that he was offering £500 (about US$800) of his own money to the salesman who could catch up with and surpass Brian by the end of the fiscal year, three months away.

He was extremely frustrated. And he was talking about my father-in-law.

When we arrived at my in-laws’ home for our Christmas visit, they had just received a huge hamper from the company in recognition of his contribution. As my mother-in-law pulled out bottle after bottle of wine, box after box of luxury biscuits and truffles, jar after jar of elegant jams and sauces, I thought about what I already knew about Brian’s selling style.

As a young man at the first company he worked for, he went through some of the most rigorous sales training around, and subsequently became a sales trainer for the company himself. He learned, and then taught others, how to pay attention to the client. He developed a very personal touch, and focused on the relational rather than the transactional meeting. He once showed me the type of meeting logs he was required to fill out in the early days of his career. The front of the page asked for details of the prospect and the products. The back of the page asked for personal details about the individual he spoke to.

He also showed me the early 1950s sales manual (Selling Kalamazoo) all the salesmen were given when they started at that company. First off, they were required to invest in a good hat and a good pen. While Brian no longer swears by the hat, he still swears by the pen. He’s happy to receive emails, but he doesn’t write them. He calls people, and when he does, he engages in as much small talk as the relationship requires, asking about the holiday in Tortola or sharing reactions to the rugby scores. He writes personal notes in his very handsome penmanship to include with the promotional material he sends out. When we say these days that time is money, we mean that we mustn’t waste it. We must get straight to the point. Brian proves us wrong.

Brian also never uses PowerPoint. He travels around his sales region with all the samples he needs in the back of his car, as he always has. He trusts his own ability to talk about his product, and he trusts the client’s ability to understand what he says. This means that in every single meeting, the person he is talking to looks at him most of the time, and he looks at them. He picks up on their signals and goes with the flow. A lot of us have forgotten how perfectly well people communicated before we started worshipping the great god Slide Deck. Better, even.

I learned something new about Brian’s style during this visit. I told my mother-in-law that I was tempted to ask him if I could shadow him on his calls and write a manual for the other guys who couldn’t keep up. “They know what he does,” she said. “They’ve all seen him work.” So why weren’t they doing it? They were letting the pressure of selling make them aggressive. Here’s how Brian put it: “What we sell is a Nice to Have. It’s not essential. It makes life easier, but you can do without it. Too many guys try to make the client think they absolutely must buy it, and they chase them too hard. I don’t.”

The result of chatting, not chasing, for Brian? Clients call him.

Brian is unerringly pleasant to do business with, because he not only respects but also enjoys the human side of business. By focusing on the individual and the relationship with the prospect, Brian has consistently been able to turn a Nice to Have into a Really Want to Have So Where Do I Sign?

I’d put £500 of my own money on no one being able to catch him before March.

(Unfortunately Selling Kalamazoo isn’t available, and was never on the public market anyway. It’s a shame, as not only the text but also the photographs of men in hats are terrific. Instead, consider reading Brian’s favorite book on sales, and one he regularly buys for new employees, How to Master the Art of Selling by Tom Hopkins. For small businesses, I also like The SOHO Solution 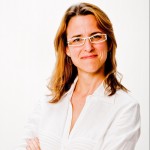 Alison Lester is a writer and communication skills coach based in Singapore. Her books include a guide to more creative and comfortable presentation skills called Present for Success, and a collection of essays called Restroom Reflections: How Communication Changes Everything. She blogs at RestroomReflections.com, and her first novel, Lillian on Life, will be published by Amy Einhorn Books in January 2015.