My lesson today centers on a man who, in my opinion, was the best basketball coach—college or pro—to have ever lived: the great John Wooden.

To most he was known as the “Wizard of Westwood,” the UCLA basketball coach who guided the Bruins to an unprecedented 10 national championships over two decades. But for those who played for him, he was much more than a coach. He was a teacher, father figure, mentor and master motivator who got every inch and more out of his players.

When I heard of his passing last June, my mind was flooded with many memories of this great man, and the impact he had on so many people, including me. I was also reminded of memories and life lessons I shared with him personally.

MAXWELL SHARES WHY WOODEN’S PYRAMID OF SUCCESS IS THE KEY TO A GOOD LIFE.

I spent some time with Coach Wooden a few years ago at his modest home in Los Angeles, where he lived for more than 30 years. It would have taken several hours just to read all of the plaques, memorabilia and awards that adorned his walls.

For three weeks, I prepared for our meeting, and I had my questions ready. I came away from that day with stories I will treasure for the rest of my life.

I want to share with you the simple creed Coach Wooden kept in his wallet since his father gave it to him at the age of 12. The words on this tattered paper served as his guidepost his entire life:

Be true to yourself.
Make each day your masterpiece.
Help others.
Drink deeply from good books.
Make friendship a fine art.
Build shelter against a rainy day.
Pray for guidance and give thanks for your blessings every day.

For 87 years, this creed molded Coach Wooden’s life. When I asked him how successful he was in keeping each of these principles, he said, “You know, John, we’re never perfect. But every day I still try to live up to the creed.”

What a great lesson to us all. Here was a man in his late 90s, at the pinnacle of success, telling me he was still trying to live up to those principles.

Most of you who are reading this are interested in winning and learning how you can get ahead at your own businesses. So let me share with you two things that helped set Coach Wooden apart from other coaches.

First, he achieved personal victories before he led his team to victory. When you look at John Wooden’s life, one of the things you come away with quickly is he was truly disciplined. Many people feel that a leader’s biggest challenge is leading other people. I don’t subscribe to this opinion. The biggest challenge as a leader is living the life of a leader. As I listened to Coach Wooden that day, I asked myself, how could he bring such success to the teams that he led? It was the victory he had over himself that allowed him to also help others become victorious.

Our standard of excellence and code of conduct can be summed up by Coach Wooden’s strategy to find happiness. He said happiness comes from making and keeping nine promises:

1. Promise yourself that you will talk health, happiness and prosperity as often as possible.

2. Promise yourself to make all your friends know there is something in them that is special that you value.

3. Promise to think only of the best, to work only for the best and to expect only the best in yourself and others.

4. Promise to be just as enthusiastic about the success of others as you are about your own.

5. Promise yourself to be so strong that nothing can disturb your peace of mind.

6. Promise to forget the mistakes of the past and press on to greater achievements in the future.

7. Promise to wear a cheerful appearance at all times and give every person you meet a smile.

8. Promise to give so much time improving yourself that you have no time to criticize others.

9. Promise to be too large for worry, too noble for anger, too strong for fear and too happy to permit trouble to press on you.

As leaders, if we haven’t won our personal battles, we’ll never be able to lead other people to victories in their battles.

I truly believe that everything rises and falls on leadership. In my book The 17 Indisputable Laws of Teamwork , I explain that the difference between two equally talented teams is leadership. When two teams come together with all things being equal—talent, experience, desire—the team with the best leader will always win. Coach Wooden had some of the most talented individuals in the country playing for him, but talent will only get you so far. It was his superior leadership that molded this talent into some of the best teams of all time. This is the second thing that set him apart.

Coach Wooden was a master at selecting players, and he knew how to motivate each person to fulfill his role on the team. Coach Wooden told me he recruited a lot of average shooters. But he also knew each player had a spot on the floor where they shot the best. He would design plays to get these players into the areas where they shot the best. If any player shot outside of their designated area, they knew they would be joining Coach Wooden on the bench. Everyone had a role, and the majority of his players mastered their roles on the team. Wooden said, “Teamwork is not a preference; it’s a requirement.” 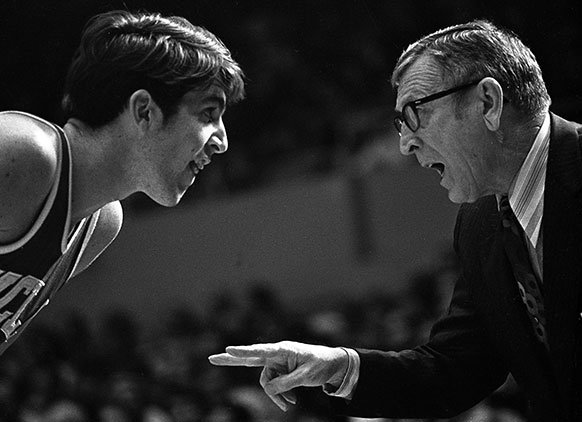 He took that mantra of teamwork to heart. One of Coach Wooden’s sayings was, “If you listen to them, they’ll listen to you.” He told me that was a lesson he learned early in his coaching career. As a new coach, Wooden says he thought coaching meant pointing and directing players where they needed to be on the court. Five or six years into his career, he realized he was leading by assumption. He assumed his players had the basics under their belt; he assumed they knew what was happening in a game. That’s when he learned the only way to close these gaps was to listen to his players. Once he found out where they were in their learning and basketball knowledge, he could lead and give them direction.

I learned so much from John Wooden that day in Los Angeles. The time we spent together will be etched forever on my mind. His words continue to touch lives the world over. And I don’t say this about a lot of people, but after I left his home I said to myself, “I want to be just like him.”

I hope you will take some of these nuggets of wisdom and look at yourself; hopefully they will have the same effect on you as they did on me.

Thanks, Coach. You are missed.

Editor’s note: This post was originally published in October 2011 and has been updated for freshness, accuracy and comprehensiveness.