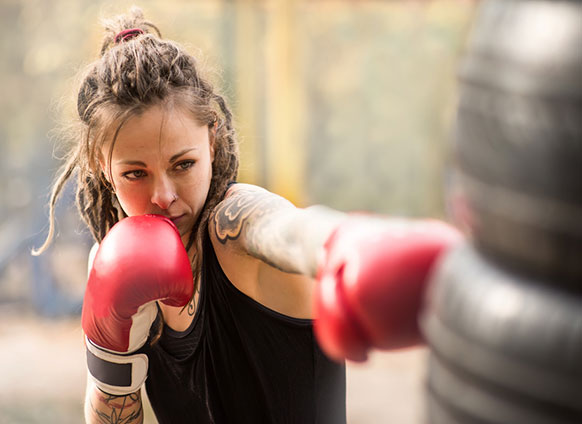 On the left side of the Pyramid of Success, below faith, there are four additional pieces of mortar: ambition, adaptability, resourcefulness and fight. These are qualities that encompass the resolve, ingenuity and resilience of the human spirit.

In his book Coach Wooden’s Pyramid of Success, with Jay Carty, Coach Wooden defined fight and its importance in the following manner:

“Fight is a determined effort to do the very best we can do…. It’s digging in, gritting our teeth, standing our ground.

“When we have fight, we are always ready to respond. We are quick, but we don’t hurry. We make fewer mistakes because we have the level of our intensity under control. A player with fight has a contained fire burning in his or her belly. This emerges as focused passion. Players with fight never lose a game; they just run out of time.

“Perhaps I should have chosen a different word. Fight has some negative connotations that I don’t want to communicate. In no way is this mortar quality about an opponent. There was a time when I would talk about ‘being better than the opponent.’ I don’t anymore. Make no mistake; I always want to win, but I never fight with an opponent. My fight is within me—it is the struggle to be the best I can be at whatever I do.

“There is no such thing as losing when we’ve made the effort to do the best we can. If we use our fight and determination to do our best, success will take care of itself.”

Under each piece of mortar on the Pyramid, in parentheses, there is some brief application advice or a description of that mortar. In the original Pyramid under fight, Coach wrote, “effort and hustle.” Later, when Coach revised and perfected the Pyramid, he changed the description to read, “determined effort.” Coach’s motivation for the change was clear. He wanted to make certain we understood that just making an effort was not real fight. Fight isn’t about simply expending energy; it’s about determination, which is having a fixed purpose or fixation of will. This clear sense of purpose is a key adjective for the kind of fight Coach believed in. It means that this effort has a “never say never” attitude attached to it.

A person who has fight is following two great pieces of advice from Coach Wooden:

Coach described adversity this way: “Adversity is the state in which man most easily becomes acquainted with himself, being especially free of admirers then.”

Fight enables us to rise to the occasion—and that’s a pretty good trait for any character!

Related: How to Find Your Drive to Succeed

Posted in Motivation, Personal Development
← How I Found Success by ‘Hiding in the Bathroom’21 Things I Wish I Knew When I Was 21 →