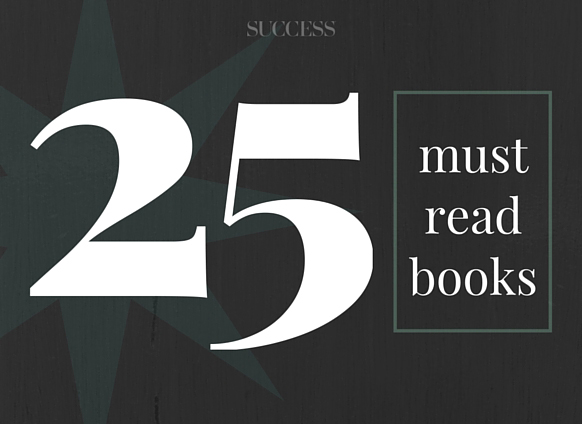 Out of hundreds, the editors of SUCCESS have narrowed our list to 25 must-read books for achievers. The task wasn’t easy, although our criteria were simple. These are books we’ve read, liked and that made a difference in our lives. We chose books that take a comprehensive approach to money, life and personal development because we know that one-dimensional success really isn’t success at all.

You might wonder why your favorite book didn’t make the list. Well, we could’ve filled the magazine with dozens more books. Our top 25 are by no stretch of the imagination the only books you should read. To the contrary, we know reading about and applying techniques and success strategies are the best ways to discover and stay focused on your life’s journey.

We hope our list opens your eyes to something new, inspires you to pick up that volume you’ve always meant to read or to re-read a favorite classic. If you have suggestions on what we didn’t include, we want to hear from you.

We encourage you to find a book that interests you and carve out a few minutes every day to read at least a few pages. You’ll be amazed at the difference it will make in your journey toward success!

1. How To Win Friends and Influence People

First published in 1937, How to Win Friends and Influence People by Dale Carnegie was an overnight success with staying power. Today, this book is regarded as one of the all-time best for its lessons on dealing with people.

The chapter titles seem, at first, a little manipulative: “Six ways to make people like you,” “12 ways to win people to your way of thinking.” But the reality of Carnegie’s teachings is that none will work if the intent is manipulation. The word “genuine” appears repeatedly throughout the book. Only with authenticity and honesty will Carnegie’s methods work consistently.

How to Win Friends and Influence People is packed with anecdotes from historical leaders and lessons learned or taught by some of history’s greatest businessmen, making the read as interesting as it is enlightening. And the methods–calling a person by his or her name or looking at the situation from the other’s point of view–work in business and in personal life with family and friends.

Carnegie’s book is a classic. Though he credits many people for inspiring his ideas, his methods are the foundation for many of today’s personal-development and business-management books.

2. The Richest Man in Babylon

Too often, life doesn’t turn out as expected. And money, or the lack of money, plays a large role in people’s ability to handle life’s ups and downs. Perhaps that’s why, in the 1920s, banks and insurance companies decided to distribute short parables written to educate people on important financial principles. The Richest Man in Babylon by George S. Clason began in 1926 as a series of pamphlets, the most famous ones later compiled into one of the best-loved money guides of all time.

The book begins with two men realizing that, while they lived a meager existence, one of their childhood friends had become known as the wealthiest man in Babylon. Despite growing up in similar circumstances, their friend seemed to have created a life of gold while they barely scratched out a living.

The situation is all too familiar even today. And like the men who’d come to the realization that they’d failed to think beyond the day at hand, readers have the opportunity to sit at the feet of the richest man in Babylon and learn how to build wealth. They learn how to plan for the future, make wise investments and how to view money as a tool rather than a measure of success.

With time-tested principles and an engaging format, The Richest Man in Babylon is an excellent introduction to finance, and a classic.

Purchase The Richest Man in Babylon in the SUCCESS Store.

Napoleon Hill, inspired by business legend Andrew Carnegie, spent 20 years of his life studying the lives of some of history’s most successful people. The culmination of his research was the in-depth series, The Laws of Success. In 1937, Hill published another book, Think and Grow Rich, founded on the same philosophies of success. This book condensed the wealth of knowledge he’s accumulated into 13 principles for successful living.

Shorter and perhaps easier to get through than its multivolume predecessor, Think and Grow Rich is as applicable today as it was when it was first released. The title’s principles are founded on Hill’s belief in the power of the mind, and his famous quotes, such as, “Whatever the mind can conceive and believe, it can achieve,” have changed the way millions of people view their lives. When read in its entirety and its principles put into action, Think and Grow Rich not only helps people change their views on life, but also the way they behave and, ultimately, their reality.

More than 30 million copies of Think and Grow Rich have been bought by business students, entrepreneurs and goal-setters around the world. When it was re-released in 2004, it rocketed once again to the top, holding a place on BusinessWeek‘s Best Seller list for paperback business books for more than 20 months.

Think and Grow Rich is a timeless classic that should be read by everyone interested in improving their lives and reaching their goals.

Purchase Think and Grow Rich in the SUCCESS Store.

4. The 9 Steps to Financial Freedom: Practical and Spiritual Steps So You Can Stop Worrying

Suze Orman (Crown, 1997) As a financial expert, Suze Orman offers advice on the nuts and bolts of managing money. But whether you’re watching her on television or reading her advice in O, The Oprah Magazine, or in one of her best-selling books, such as 9 Steps to Financial Freedom, her message is clear: Wealth is an attitude and money isn’t the key to acquiring true financial freedom.

In this acclaimed book, Orman challenges readers to face their financial fears and acknowledge the importance of planning for the future. With a three-pronged approach, Orman tackles the mental, physical and spiritual issues that keep people from reaching financial freedom. Also available in audio format, 9 Steps to Financial Freedom encourages personal growth while offering the education necessary to begin the process of building a rich life.

Again, it’s the total approach to financial success that sets this and the other financial books on this list apart. Acquiring wealth isn’t as simple as piling up the green stuff. Your beliefs about money, yourself and the world around you have as much to do with wealth as do the riches you acquire.

5. The 7 Habits of Highly Effective People

While Stephen Covey wasn’t the first to write a book on becoming a better, more effective person, The 7 Habits of Highly Effective People marked the beginning of a revitalized interest in personal development. With a 15th anniversary edition released in 2004 and more than 15 million copies sold, this book has helped millions change their perspective and their lives.

Unlike many authors of books in this genre, Covey doesn’t promise a simple, quick fix for creating a better life. In fact, mastering the seven habits he outlines could take a lifetime. But as with many personal-development efforts, it’s what you learn as you work toward becoming a truly effective person that matters.

The habits are divided into three sections: Private Victory, Public Victory and Renewal. Private Victory focuses on the individual’s view of himself. The first three habits are: becoming proactive, beginning with the end in mind, and putting first things first. These habits will challenge you to take responsibility for your thoughts, beliefs and actions. The Public Victory section focuses on creating meaningful, mutually beneficial relationships. And because being effective requires energy and focus, the seventh habit, “Sharpening the Saw,” encourages you to engage in activities that promote mental and physical renewal.

Covey says that when our behavior contradicts our beliefs or when our relationships consistently fail, any successes we achieve feel hollow. This book takes a total approach to success and encourages growth and maturity beginning with self, which leads to stronger relationships and greater success at home and at work.

Purchase The 7 Habits of Highly Effective People in the SUCCESS Store.